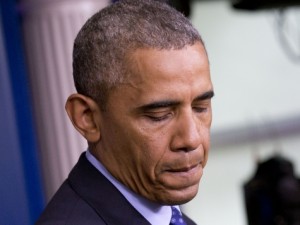 President Obama has responded to today’s terrorist attack in Yerushalayim in which four Yidden were killed by condemning the attack – and stating that “the majority of Palestinians” want peace.

In a statement delivered to the White House press pool, President Obama responded to the attack by declaring that “too many Palestinians have died,” as well as Israelis, in the struggle between the state of Israel and the terrorist group Hamas and its affiliates, including the internationally active Muslim Brotherhood. “At this difficult time,” the president told reporters, “I think it’s important for both Palestinians and Israelis to try to work together to lower tensions and reject violence.”

“We have to remind ourselves that the majority of Palestinians and Israelis overwhelmingly want peace,” the statement concludes, before the President begins remarks on the Ebola crisis in West Africa. The President did not take questions.

The President’s remarks follow Secretary of State John Kerry’s response to the terrorist attack, in which he called “on Palestinian leadership at every single level to condemn this in the most powerful terms.” Palestinian Authority head Mahmoud Abbas, on his end, nominally condemned the attack while “stressing the need to end the causes of such attacks like tensions over what Jews call the Temple Mount and Palestinians call al-Aqsa Mosque.” Such a dismissal of the increasingly out-of-control terrorist activity by Palestinian extremists received the typical benefit of the doubt from mainstream media.