Never missing an opportunity to take a religious issue and paint it in the most ugly shades of hate possible, Haaretz published the cartoon seen below regarding the recent tumult about the permissibility of using Shabbos elevators.

The cartoon is as follows: 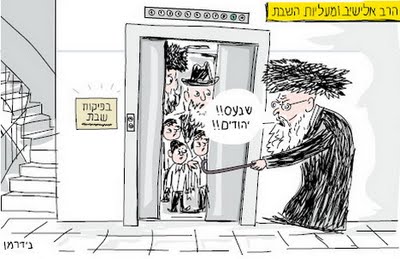 The chareidi caricaturist Moti Heller is well-known to readers of Israeli papers where his creativity has been regularly featured. After seeing today’s hateful cartoon in Haaretz mocking the gadol hador, Moti is furious and has said he’ll fight back using his abilities.

He prepared a caricature of his own, based on the Haaretz cartoon. A cartoonist is seen getting of an elevator, ready to pounce on the chareidim.

“It’s offensive, insulting and degrading,” said Moti. “Even humor has its limits.” he said. “We all know the power of caricature. A few years ago, a cartoon of [Islam’s founder] led to demonstrations and murders.”

“Certainly. I try to regularly.”

So what’s new this time?

“It’s not the first time,” said Moti, “but the published cartoon was anti-Semitic. I have no words…”

Moti’s cartoon is as follows: 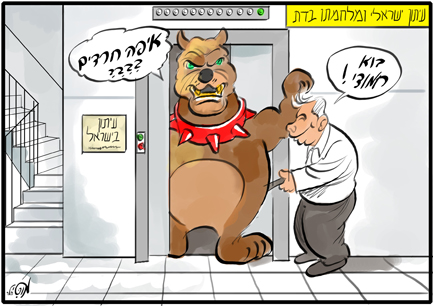