A sad Shabbos seudah was held Friday evening at the Shalit family’s protest tent outside Prime Minister Ehud Olmert’s residence in Yerushalayim. Some 40 close and distant relatives of kidnapped soldier Gilad Shalit sat around the table for the Shabbos meal. An empty seat carrying Gilad’s picture was placed between the captive’s father, Noam, and his brother, Yoel.
“I would like to thank the masses of people who arrived to encourage, strengthen and support the family over the past week and convey the public’s unequivocal message to the prime minister that most of the people of Israel, if not all, want to see Gilad home,” Noam Shalit said after making kiddush.Shalit went on to thank the dozens of activists who have keept the tent clean and tidy throughout the past week, adding that he hoped the public protest would bear fruit.

“We are encouraged by the broad public’s support, and I hope this reaches the suitable places,” he said.

The Shabbos meal table was placed by the activists across from a wall carrying hundreds of notes left behind by Israelis who visits the tent throughout the week. 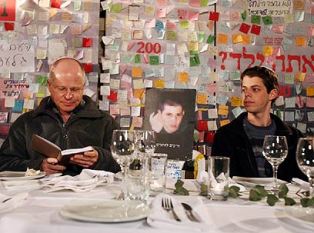 Earlier yesterday, hundreds of supporters arrived at the Shalit family protest tent, carrying signs with Gilad Shalit’s face on them, whistling loudly and shouting out slogans such as “(Prime Minister Ehud) Olmert, you made a promise, Olmert, keep it!”

Several of the protesters even temporarily blocked the access road to the site.

Noam Shalit shared his feelings about the broad display of support, saying, “We only organized the place, not the people. They came from all over the country spontaneously, and this encourages us.”

When asked about his personal feelings however, Shalit said, “The only thing that will warm our hearts is bringing an end to this affair – that is what matters to us.”

Friday marked the family’s sixth day in the tent, and the father said that, while he was not used to life in front of the cameras and constant exposure to critics and the media, he remained strong.

“This is not a reality show – this is real survival. When I think of what Gilad goes through every day in captivity, I get the energy to come here every day,” he said.