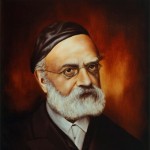 One hundred years ago, on Shabbos Chanukah 1915, a single young woman, Sarah Schneirer, attended a Shabbos afternoon women’s shiur given by Rabbiner Flesch, a dayan of the Schiffshul, the main kehillah of Vienna, and he quoted some of Rav Shamshon Raphael Hirsch’s ideas. Rav Hirsch’s words so impressed her that she began reading his writings, diligently studying Horeb and The Nineteen Letters. Feeling a need to carry the teachings of Rav Hirsch even further, she opened her school in Krakow in 1917, teaching her pupils Chumash with Rav Hirsch’s commentary and giving courses on The Nineteen Letters. In order for the girls to understand his writings without translation, she required them to learn the German language.

Dr. Leo Deutschlander wrote about the “inner development of this unique woman”: “No spiritual and intellectual force compared to the influence of the writings of Rav Shamshon Raphael Hirsch in the self education and inner development of the personality of Sarah Schneirer. Hundreds of essays from the collected writings were copied again and again and distributed in stencil form among the Bais Yaakov girls. No other books in the Bais Yaakov library were used so often, or showed such signs of wear and tear, as the Hirsch seforim. Up to the very last month of her life, she lectured to her students on Hirsch’s Nineteen Letters of Ben Uziel, which was her favorite book and which she loved to study with her pupils.”

It is pretty safe to say that in recent history, the closest we have been to experiencing the world of the Misyavnim and the havoc they wreaked on the Jewish community in Eretz Yisroel during Bayis Sheini was the state of affairs in Germany and the surrounding countries during the 1800s through the Second World War. Perhaps the two people who best represented the Maccabim in that battle were Rav Shamshon Raphael Hirsch and Frau Sarah Schneirer, and it was on Shabbos Chanukah that Hashgachah Elyonah arranged for Sarah Schneirer to be introduced to the ammunition that would enable her in her single-minded battle for the hearts and minds of bnos Yisroel.