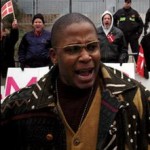 Black Lawyers for Justice President Malik Zulu Shabazz argued that the Baltimore Police Department is an occupying force, like Israel on Tuesday’s “Hannity” on the Fox News Channel.

Shabazz dismissed the people throwing bottles at police as “just some lightweight bottle throwing. I don’t think it’s anything serious…it’s just a few bottles being thrown, I mean, it’s nothing serious.”

He added, “some live here, and they don’t want to be told to be going home. And so what you still see here is tension and frustration around the issue. You’ve also seen tonight, very intelligent young black men, who are expressing the real facts and statistics of the socioeconomic decay in this community.” And that some “do not like the National Guard occupying the community. You know that this is a natural antagonism, all of these National Guard here, if they weren’t here, the people wouldn’t even be out here.”

Shabazz then said of those defying the curfew, “don’t they look like the Palestinians going against the Israelis?” He was asked, “you’re saying that the Baltimore Police are an occupying force here? what would happen with this neighborhood but for the cops?” He responded, that the police were an occupying force, and that if the police weren’t there, “I don’t think much would happen tonight, to be honest. I really think tonight if they weren’t here, no crowd would be here. You know how Ferguson was. The more armored police show up, the more people want to stay out and challenge them. So, I mean, it’ll work itself out.”