Masses of Yidden demonstrated today in an ongoing protest against the opening of the Karta parking lot on Shabbos to accommodate weekend visitors to the Old City. The level of violence at the afternoon protest was lower than it was the previous weekend, police said. The Eidah Hachareidis have planned an additional major midweek demonstration in Yerushalayim.

In the latest protests, several hundred people yelled “Shabbos, Shabbos,” “Nazis” and “anti-Semites,” at the parking lot opposite Shaar Yaffo.

Some who tried to enter the lotwere forcibly prevented from entering the area by police, Yerushalayim police spokesman Shmuel Ben-Ruby said. 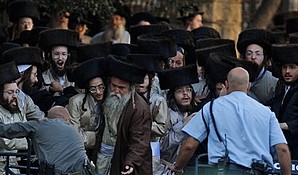 Several protesters intermittently hurled rocks at police, as well as at passing vehicles elsewhere in the city, Ben-Ruby claimed. There were no injuries reported in the altercation, he said, and one demonstrator was arrested on the scene.

After Shabbos ended, several garbage bins in Meah Shearim were set on fire.

The protests began a month ago, after the city opened the municipal parking lot on Shabbos, free of charge, to accommodate weekend visitors.

Seeking to reach a compromise, Yerushalayim Mayor Nir Barkat subsequently arranged to open the Karta parking lot opposite the walls of the Old City.

Barkat spokesman Evyatar Elad said today that the decision to open the parking lot on Shabbaos would stand.

“The mayor is committed to the safety of the public,” Elad said, noting that some 370 motorists used the car park today.

The original decision to open the parking garage on Shabbos was made at the urging of police, who said that a lack of parking around the Old City was leading to double-parked cars on major city thoroughfares, posing a safety hazard.