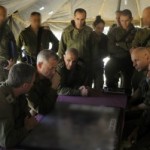 A senior Israel Defense Forces officer told The Algemeiner that he personally witnessed a Hamas fighter seize children to hide behind after firing at Israeli troops during Operation Protective Edge in Gaza.

In a recent wide-ranging interview, Colonel Yonatan Branski, who commanded missions in Beit Hanoun during the Operation, also revealed intimate details of Hamas warfare tactics, explained the unprecedented steps Israel takes to prevent civilian casualties during combat, and asserted that the IDF is the planet’s most moral army.

Branksi’s comments were made with the approval of the IDF, but in a personal capacity during a recent visit to New York.

Until just a year ago, Branski served as the Deputy Commander of the Southern Command’s Gaza Division. Now an instructor in the Commander and Staff College of the IDF, he was reassigned to command infantry and armored brigades during the war.

The Colonel described the Gaza terror infrastructure as being “like two cities, one above the ground and one beneath the ground.”

“There is a whole network underneath the ground with ammunition storages and war rooms,” he said. “They even slept there.”

“They don’t have a problem using United Nations facilities or schools,” he said. “They do it all the time; they did it all the time.” He said that he doesn’t know how Hamas operatives gain access to the UN properties, and added that the UN is “not doing enough to stop it.”

“Maybe some of the people who work for the UN are… connected to Hamas,” Branski speculated.

The most immoral act he witnessed during the Gaza fighting, Branski said, was a Hamas fighter who “launched an (anti-tank) missile, and then he grabbed two children… (and) ran with them across the street to hide.”

Branski said that Hamas fighters also understand the negative connotations that come with being caught firing from schools, and began to operate from just outside the civilian structures hoping that the Israeli response would miss its mark and strike innocents.

“They (Hamas fighters) stood outside the school yard, and shot. Then they hoped that we’d shoot back… It happened 21 times, one after the other,” he said.

The Colonel listed three possible scenarios in which a civilian could mistakenly be killed, two of which he said where rarities.

The first “is because we have made a mistake in identifying the person we think is a terrorist and he is not,” he said. “It doesn’t happen a lot, but sometimes it happens.”

The second “is that the terrorist shooting Israeli civilians or soldiers is using civilians as a human shield or he shoots from a house where people live or things like that.”

“And the third reason can be because of a miss,” he said. “It can happen, but it doesn’t happen a lot.”

With the fog of war clearing and initial figures on civilian casualties used by mainstream media organizations being called into question, it is now emerging that the IDF’s civilian to combatant kill ratio is almost 1:1, an unprecedented figure.

Branski detailed the length to which the IDF goes to avoid civilian casualties as well as the process through which decisions to engage the enemy are made.

“If we can use something very accurate, then of course we do it. That’s the rules of engagement. You start with the most accurate weapon you can use. But if you are bombed by ten or twelve or dozens of mortar shells from an area of a few houses and you don’t have an airplane in the area who can stop it right now because it takes time, you know – an airplane, if you want him to hit the target, it takes time. He’s not always there. You have to give him the details of the target, and he has to be prepared and he has to have a bomb ready. But if civilians in Israel are now inside the shelters and they’re being bombed by mortar shells from two or three houses in a neighborhood, then we have to react. We have to respond. We have to stop the threat.”

“But we do it only if there is no other way to stop the threat,” he said. “Of course, if our civilians are under threat then there’s no way I’m going to just sit there and watch without responding to the threat.”

“We don’t just use artillery in urban areas because we feel like it. We never do that.”

According to the rules of engagement, the IDF only shoots without question “when there’s a force or civilians which are under direct fire right now, then we respond immediately. But otherwise we have reconnaissance, we have phones, we look at the area, we see that there are no civilians over there.”

Branski said that as a commander, “one of the hardest decisions” is about to what extent he is willing to endanger his forces to protect civilians.

“We speak about these things in courses and commander courses in the military academy. We try to think of things that can happen, simulations… The rules of engagement are very strict and very well thought out.”

Asked to back up his assertion that the IDF is the world’s most moral army, he referred to his knowledge of how other armies conduct themselves during wartime.

“I know what people from other armies tell me when they speak to me and it’s unbelievable what they do; it’s crazy. I mean, we’d never do anything like that,” he said. “I’m not saying that every other army is not moral. I’m saying that we avoid doing things that any other army would not avoid.”

“For example,” he said, “when you know that there’s an ammunition storage with rockets or a war room of Hamas inside a house where people live and… we sent flyers and told them… we’re going to invade and they should leave the town and go into the City of Gaza to keep safe. And… according to international law it’s considered a military post because it has a military purpose, we still ring them on the phone and we tell them that in five minutes we’re going to bomb the house and people should leave the house. I don’t know any other army which would do something like that.”

Asked why he thinks the IDF is the world’s most scrutinized army, Branski said it is because Israel is the Jewish state.

“I think Am Yisrael (the people of Israel) are always in the middle of the tension of the whole world. I don’t know. I think there’s something good about it. It means that they expect us to be more moral – it’s like the good student in the class that when he does something that maybe with other students you wouldn’t even pay attention, but when he does it you say, ‘Hey, how come you behaved like that?’ Because he is a good student you expect too much of him. So I think they expect us to be more moral. Maybe they don’t know how to explain it themselves, but that’s the way it is. I think there’s something good about it, although it’s disturbing.”

In conclusion, Branski said, his strength comes from within.

“I try to concentrate on what I have to do and not think of what the world thinks. I know I’m moral. I know we’re a moral army, and I don’t need any okay from anyone else.”