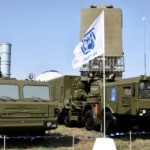 “On one hand, we never imagined that the Russian S-400 missile system would be set up in our back yard, or that we would see cruise missiles flying over Syria,” said the officer. “On the other hand, it must be understood that the S-400 is not a threat to Israel or to its capabilities.”

Russia recently deployed the anti-aircraft system in its air base near Latakia after a Turkish jet shot down a Russian plane near the Syrian-Turkish border.

The officer also said he expected the nuclear deal reached in July between Iran and world powers, known as the Joint Comprehensive Plan of Action, to have a positive effect on the IDF’s budget. The nuclear deal, he said, also “presents the IDF with a strategic shift, enables us to rethink our assessment, preparedness and ability to cope with the Iranian nuclear threat.”

He stressed the importance of understanding that the threat from Iran does not stem from its nuclear program alone, but also from its growing terror infrastructure in the Golan Heights and its support for terror groups in the West Bank, Gaza and across the Middle East, according to Channel 2.