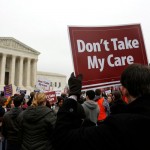 The Senate passed a bill on Thursday to repeal key provisions of the Affordable Care Act and defund Planned Parenthood for one year.

The bill will go to the House of Representatives, where it’s expected to pass, but President Barack Obama has vowed to veto the measure.

The House has voted numerous times to repeal Obamacare and defund Planned Parenthood, but the legislation is the first to reach the president’s desk. The bill passed narrowly in the Senate 52-47. Read more at at The Hill.