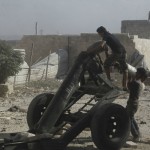 The Senate approved by a comfortable margin President Obama’s plan to arm and trained moderate rebels to help in the campaign to “degrade and destroy” ISIS, also known as Islamic State.

A number of senators had questioned the proposal, with some Republican hawks complaining that Obama’s policy was not aggressive enough, and some Democrats fretting that the move would help drag the United States into another drawn-out Mideast conflict. Other critics expressed doubts about the extent to which there are any “moderate” Syrian rebels.

In the end the Senate passed the legislation by a 78-22 margin. The bill now goes to the president, who thanked congressional leaders after the vote for “the speed and seriousness with which they approached this issue.”  Read it at MSNBC.