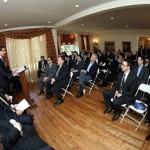 On Sunday morning, New York State Senate Majority Coalition Leader Dean Skelos prefaced his trip to Albany for intense work on the state budget by attending a community breakfast in Lawrence, arranged by Agudath Israel of America and hosted by local businessman and activist Shabse Fuchs and his wife in their home.

The breakfast has become an annual tradition as of late, where Jewish communities in the Far Rockaway/Five Towns area gather meet, greet, thank and inform the man who is both their representative in state government for over thirty years and one of the three most powerful elected officials in the state.

Host Shabse Fuchs welcomed the senator and other attendees, and cited Mr. Skelos’ longstanding advocacy and accomplishments on behalf of the orthodox community’s needs. “We are proud to welcome you into our home and proud to call you our leader,” he said.

Despite the early weekend morning hour – fresh off a clock change – the spacious home was filled with a standing-room-only crowd of local rabbanim, mechanchim,businessmen, activists and everyday citizens – enjoying a hot buffet breakfast and offering lots of food for thought.

The message that the event’s attendees and speakers relayed to Senator Skelos was as multifaceted as the needs of New York’s orthodox communities, but it bore one crystal clear, dominant message. Echoing the theme of the recent Agudath Israel mission to Albany, Senator Skelos was informed that families in our communities see as paramount the implementation of Senate bill “S4099,” widely known as the Educational Investment Tax Credit (EITC).

The bill would enable New York taxpayers who donate to a scholarship fund for nonpublic school students to deduct their full donation amount from their state tax liabilities. Similar legislation has been constitutionally enacted in 16 U.S. states and twice passed the New York State Senate, but the bill has yet to be allowed to the floor of the New York State Assembly for a vote, despite a significant number of assembly members of both parties who have announced their support. During the upcoming weeks of intense budget negotiations between the two legislative houses and Governor Andrew Cuomo, it remains up to proponents to effectively insist that the tax credit be part of the inevitable eventual budget compromise.

Citing the Judaic principle of hakoras hatov, Rabbi Chaim Dovid Zwiebel, Executive Vice President of Agudath Israel, began his address by thanking Senator Skelos for his past accomplishments on behalf of the community, which include funding for nonpublic school transportation, Tuition Assistance Program for post high school yeshivas and Bais Yaakovs, and infertility treatments.

“Dean Skelos stands on principle, and has a track record of tangible accomplishments even on issues that people believed ‘can’t be done,'” said Rabbi Zwiebel. He added that even with the challenges inherent in fully implementing EITC, it remains a highly realistic goal for this year – better than ever before. “We are inches away from the end zone,” he said.

Harav Binyomin Kamenetsky, shlit”a,Rosh Yeshiva of Yeshiva of South Shore, who has a decades long relationship with Senator Skelos, then took to the podium and called the prominent legislator “a personal friend…(who) not only opens his doors for our community, but opens his heart.”

Lawrence and its neighboring towns are known for their serene suburban setting and the many successful business owners and professionals residing within their midst. Yet, after spending just a few minutes at the breakfast, it became crystal clear that the challenge for meeting yeshiva and Bais Yaakov tuition bills spares no orthodox community. One participant remarked over a plate of scrambled eggs and hash browns, “I, baruch Hashem, have a respectable job, but my wife must go to work each day simply in order to cover our tuition bills,” which typically run between $10,000 to $15,000 a year per child in area mosdos.

Attorney Eric Stern of the Sack and Sack law firm, who dedicates himself pro bono on behalf of Agudath Israel on religious freedom issues, delivered an impassioned talk on the issue at hand. “Parents have a fundamental right and responsibility to direct their children’s education,” he said.

Mr. Stern noted that Agudath Israel’s government advocacy on behalf of orthodox community schools dates back virtually as long as these institutions exist in America. He recited the words of legendary Agudath Israel leader Rabbi Moshe Sherer zt”l,who testified in Congress in 1978 that funding constraints of nonpublic school amount to “pocketbook coercion” of parents’ religious rights.

Quipping that attendees were no doubt eager to hear from an accountant during tax season, local resident Uri Schlachter, a CPA at a prestigious Long Island accounting firm, got down to the numbers related to tuition. “It is frightening to compare the numbers I see on the tax returns (of local residents) to rising tuition costs,” he remarked.

Mr. Schlachter contended that the dollar-for-dollar tax benefit under EITC would serve as a major motivator for donations, as opposed to the current more meager tax benefits for charity, and added that Florida taxpayers were shown to receive $1.49 in benefits for every dollar expended on that state’s scholarship tax credit. “‘130,000’ is the number of yeshiva students who would benefit from this bill,” he stated.

Rabbi Ari Ginian, executive director of Yeshiva Ketana of Long Island, relayed the tuition crisis from the perspective of his current position, as well as the stories he grew up hearing as the descendant of a chain of decorated army veterans. Rabbi Ginian compared the women who must be away from their children in order to work to cover tuition bills to the sacrifice of army wives of yesteryear while their husbands were on remote battlefields. “We need to give families a chance to be wholesome,” he implored, “and give children a chance to grow up to be at the forefront of their generation.”

Senator Skelos left no room for doubt that this “wonderful day” has a real life effect on his time and work in the legislative halls of Albany. He delivered a visibly heartfelt talk on merits of EITC, and how educational choice for parents, both religious and nonreligious, should be the “choice” that elected officials expend their efforts to support. Senator Skelos vowed to the audience that “my head and heart are in this” and expressed optimism that some form of the tax credit will actually be implemented this year. “It is the right thing to do and very close,” he said. “This community is not motivated by self-interest, but rather by what is good for the children.”

Only time will tell whether and when the tax credit will indeed be enshrined into New York State law. Nevertheless, it is already clear that Senator Skelos and his unusually strong and congenial relationship with his sizable orthodox Jewish constituency would be significant forces behind any eventual triumph, b’siyatta dishmaya. “This is the only place in the entire country where the orthodox community has a significant concentration in the district of such a powerful state legislative leader,” remarks Rabbi Yehiel Kalish, Agudah’s vice president for development and state relations.