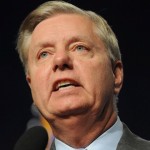 “Obama’s strategy against ISIL is not working. It’s failing,” Graham, who is running for president, said Sunday on CNN’s “State of the Union.” “We don’t have until the next election to deal with ISIL. There is a 9/11 coming, and it’s coming from Syria if we don’t disrupt their operations inside of Syria.”

Turkey wants to defeat ISIS as much as the Unites States does, he said, and a second ISIS attack on France over the weekend should enable America to rally the world.

“I am not trying to have pride of authorship here; I’m trying to protect America from another 9/11,” Graham said. “Without American boots on the ground in Syria and Iraq, we’re going to get it here at home.”

“Please, for God’s sakes, wake up to the threats we face,” Graham said.