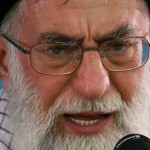 Sen. Dianne Feinstein (D-Calif.), vice chair of the of the Senate Intelligence Committee, also spoke on CNN, saying she wishes Netanyahu “would contain himself.”

Feinstein also said that Iranian Foreign Minister Mohammad Javad Zarif and Iranian President Hassan Rouhani appear to be genuinely cooperating, and that Iran’s supreme leader Ayatollah Ali Khamenei “will be agreeable” when it comes to the deal, though she cautioned the agreement must be written down and become binding.

Khamenei has repeatedly called for for Israel’s annihilation, and called for “Death to America,” in a speech earlier this month.