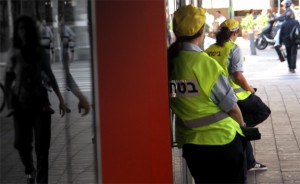 After another terror-ridden day in Israel, in which three stabbing attacks took place, further security measures across the country were decided upon Monday night in order to reassure concerned parents.

The Rishon LeZion Municipality responded to the terror attack that took place in the city by reinforcing security with an additional 30 local patrol vehicles and 12 police cars. In addition, all security guards in the city will conduct patrols near schools, as well as entertainment and business centers. However, the city’s residents are concerned: “Only when something happens they remember to reinforce security.”

Three people were injured in the terror attack that took place this afternoon in Rishon LeZion, two of them severely. Passersby were able to gain control over the terrorist, a 19-year-old from Chevron, alongside police forces who prevented the crowd from lynching the terrorist.

The attack began on the bus, where the terrorist stabbed a man in his 40’s. He then got off the bus and ran towards a bakery down the street, where he stabbed two other people. Next he tried to stab a worker at a nearby cosmetics store, but the crowd managed to gain control over him. Several passersby began beating the terrorist, before police officers took him to a nearby clothing store and locked him there until his arrest.

Rishon LeZion Mayor Dov Tsur informed the city’s residents of the new measures to increase security: “We have reinforced security at schools, childcare programs and kindergartens and are in peak presence at educational institutions while the children enter and exit them,” he explained. Tsur also commended the conduct of the security guards and civilians in his city: “The security forces spread across the city, together with a group of determined and caring citizens, managed to neutralize the terrorist quickly and prevented a more severe attack on innocent civilians,” he stated.

The municipality in Netanya, where a 71-year-old man was severely injured today in a stabbing attack, also convened for an emergency meeting and decided to reinforce patrols near educational institutions and other sites where crowds are expected to gather.

Meanwhile, the Ministry of Finance agreed to extend the period of funding for reinforced security at educational institutions after 13:30 PM for another two weeks at least, “in light of the continuation of security tensions.”