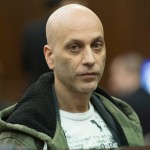 The missing $5 million in diamonds from J. Birnbach Jewelers on 47th St in midtown Manhattan have been found and a suspect has been arrested, NYPD Chief of Detectives Robert Boyce said Wednesday.

Investigators say workers from Jonathan Birnbach’s store were helping their boss move the jewelry boxes to another floor. Workers mistakenly discarded three old wooden boxes which contained the diamonds into the trash without considering the contents.

Wilfred Martinez 48, a security guard in the building came out of the elevator on the third floor and after seeing the discarded boxes discovered the gems which included the 17 carat stone worth $3.2 million along with several other precious items. He promptly proceeded to sell the now stolen merchandise to another jeweler in the building.

While Detectives from NYPD’s Major Case Squad reviewed surveillance footage from November 24, police observed that at approximately 5:01 p.m., Martinez took the boxes into a bathroom, returned two boxes to the hallway and left with one box.

Martinez told detectives that he read of the diamond loss in the newspaper, specifically that the loss was reported to be over $5 million.

On December 14, Martinez admitted taking the jewel stash from the third floor hallway and selling the diamonds to a jeweler on the sixth floor. Martinez told investigators he received over $74,000 in exchange for the diamonds.

Later that day, he told investigators that he still possessed one large diamond and two smaller diamonds, and that he had sent two other diamonds to be made into a ring.

On Monday night at 8:30 p.m. detectives picked Martinez up at his house in the Lower East Side of Manhattan. He was later charged with criminal possession of stolen property.

Initially estimated at $10 million, a $5 million loss is nevertheless substantial. Martinez gave a complete statement and the diamonds and cash were recovered and returned according to Detective Bryce.

Bail was set at $100000 Tuesday at his arraignment in Manhattan Criminal Court Tuesday.

Jeweler Jonathan Birnbach initially told cops he placed the three boxes in a safe that had been left unlocked on Nov. 24, and didn’t discover the gems were missing until last Wednesday.