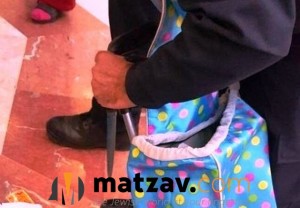 Today, a 70 year old secular woman holding a kitchen knife chased after a Gerer chossid in Arad, yelling at him to “go to work.”

The woman was arrested by the police. The man was not hurt.

Tensions between chareidim and secular Jews in Arad has increased greatly in recent years. During the last elections, red lines were crossed by the city’s chilonim, who engaged in open, public incitement against chareidim.

A letter sent previously to the mayor of the city by members of the chareidi community took him to task for allowing the anti-chareidi incitement, stating that Arad is becoming a place “no one would want to live in. Housing prices are dropping by the day and are becoming the cheapest in the country,” as a result of the tolerance of anti-chareidi sentiment.