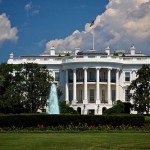 The Secret Service scrambled yesterday afternoon at an unidentified 4-year-old managed to climb under a White House fence.

“Pool loaded the vans at 12:38 pm and motorcade is rolling at 12:51 pm to an undisclosed location.

“As the pool was initially gathering at the north doors of the Palm Room, security agents suddenly rushed to the north lawn with their weapons drawn and pool was told to get back inside. It turned out to be a non-incident, in which an individual jumped over the small bike fence outside the White House gate. After a few moments, pool was able to gather again. Your pooler has reached out to Secret Service for more details.”

Then came the update: “Update on brief security scramble at the White House prior to departure: It was just a child.”