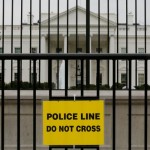 Secret Service Director Julia Pierson, who has been skewered by critics over the Sept. 19 White House security breach, has resigned, according to the U.S. Department of Homeland Security.

“Today Julia Pierson, the director of the United States Secret Service, offered her resignation, and I accepted it,” Homeland Security Secretary Jeh Johnson said in a statement. “I salute her 30 years of distinguished service to the Secret Service and the Nation.”

Pierson’s resignation comes in the wake of an incident in which Omar Gonzalez, a knife-wielding Iraq War vet, allegedly managed to slip over the fence, past several layers of security, and into the White House’s East Room, where he was subdued by an off-duty agent.

Lawmakers at a congressional hearing Tuesday demanded to know how such a breach of one of the most secure buildings in the world could have taken place.

“It will never happen again,” Pierson assured lawmakers at the hearing. Read more at ABC NEWS.