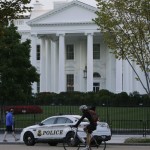 The Secret Service bungled the response after a gunman managed to fire into the first family’s living room on November 11, 2011. While the gunman, Oscar R. Ortega-Hernandez, was apprehended, the Secret Service failed to properly investigate the shooting, according to an investigation by the Washington Post.

The discovery of the security lapses comes days after a man wielding a knife was able to jump the White House fence and sprint towards the front door. The Secret Service has also been caught in unprofessional situations, including soliciting prostitutes in Colombia in 2012 and getting drunk on the job this past March. Read more at the Washington Post.