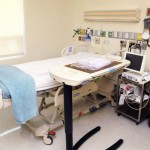 A previously undisclosed Ebola patient being treated at Emory University Hospital was released on Sunday. The unnamed male was transported to Emory on Sept. 9, and has been determined to be free of the virus. He plans to make a statement later.

There were two high-profile cases of Ebola taken to Emory, but they were released in August, and there is another Ebola patient, a nurse who treated the Dallas case, who arrived last week. Read more at 11 Alive.