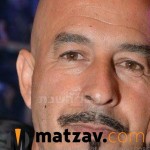 Ofer Ben-Ari Hy”d, 46, of Yerushalayim, who was accidentally shot by police during the stabbing attack at Shaar Yaffo today, has passed away. He is survived by his wife and two children.

The attack was carried out by two Palestinian stabbers, both of whom were shot by policewomen at the scene. One of them was killed immediately and the other later succumbed to his wounds, police and paramedics said.

Witnesses said one of the victims struggled with his stabber on the ground and was stabbed multiple times.

As reported earlier, Rabbi Reuvain Biermacher Hy”d, a rebbi at Aish Hatorah, passed away from his wounds sustained in the stabbing attack.