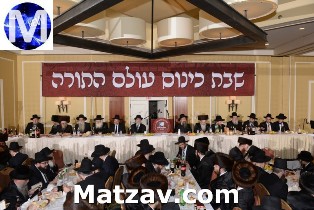 [Photos here and here .] Roshei Yeshivos and Gedolei Torah, dayanim and Rabbanim convened this past Shabbos for Dirshu’s Second Annual Kinus Olam HaTorah in New Jersey. The main topics on the agenda were promoting Torah study throughout the world and supporting avreichim in Eretz Yisrael during this period of incitement and cruel edicts against lomdei Torah.

Tefillos and seudos Shabbos were accompanied by world-renowned singer R’ Isaac Honig and the Shira Choir who brought the congregation to tears with their powerful voices and stirring song.

Between Kabbalas Shabbos and Maariv, HaGaon HaRav Yitzchak Sorotzkin, shlit”a, Rosh Yeshivas Telz, Cleveland, addressed the audience, lamenting the unashamed discrimination and laws crushing lomdei Torah in Eretz Yisrael. “There is a concept of davening and learning Torah,” he expressed, “but there is a completely different concept of avdus, servitude, of being an eved Hashem. One who devotes his entire being to the holy Torah and advances ever forward in his knowledge and learning of one masechta and another and another, and whose mind is immersed night and day in but one thing-the holy Torah-he may be called an eved Hashem. Dirshu transforms lomdei Torah into avdei Hashem, mammash, servants who are wholly bound to the Will of Hashem.  Night and day, they are absorbed in learning, in preparing for tests, in taking tests; and their very soul transforms into that of an eved Hashem.”

Nearing the end of his poignant speech, HaRav Sorotzkin burst into anguished tears as he bemoaned the battles being spitefully waged against Torah in Eretz Yisrael. “Today in Eretz Yisrael, they are enacting more and more laws against the Torah world. ‘Your destroyer and slayers, from you will emerge,'” he quoted the age-old prophecy. “Who would have believed that Yidden would decree to uproot Torah from Eretz Yisrael!? Avreichim in Eretz Hakodesh are choking beneath the evil government’s decrees. The question is: What are we in America are doing? And the truth must be said that, here in America, we aren’t doing enough!” His voice thundered among the crowd. “We aren’t sufficiently sharing in the anguish of our brothers or helping them to bear the burden of Torah in Eretz Yisrael! Saying a kapittel Tehillim for ‘the matzav’ in Eretz Yisrael isn’t enough! The Torah world in America must accept a greater share of the burden to counteract the terrible decrees in Eretz Yisrael. We must strengthen ourselves ever more in limud Torah!”

Hagaon HaRav Zev Samet, shlit”a, a maggid shiur for Daf HaYomi B’Halacha, spoke during seudas leil Shabbos. “Dirshu has instigated a veritable revolution in the Torah world. Through its wealth of learning programs, Dirshu has changed the face of each individual lomed Torah, turning him from one who learns Torah into one who knows Torah. One of the unique advantages of Dirshu is that it extracts the latent learning potential of each individual, and instills within him new concepts in learning, endowing him with patent understanding and clarity. As a maggid shiur for the Daf HaYomi B’Halacha program, I know that whether summer, winter, Shabbos or weekday, I’m obligated to be there. Day after day, shiur after shiur. When you feel obligated to do something, you know that you must fulfill it. This is Dirshu’s greatest accomplishments-granting every person a new goal each and every day, a goal that every learner knows that he can-and must-achieve.”

After the seudah, there was a question-and-answer session with HaGaon HaRav Yechiel Mechel Steinmetz, shlit”a, Dayan of Toldos Yaakov Yosef of Skver. The tent was filled to capacity with hundreds who listened, riveted, to the questions presented and translated by HaGaon HaRav Eliezer Ralbag of Lakewood, which regarded a fascinating variety of essential Halachic topics and questions that Dayan Steinmetz has addressed in the past months. HaRav Steinmetz concluded the session with divrei chizuk extolling the magnificent sense of unity that Dirshu fosters among lomdei Torah worldwide.

A stirring scene ensued thereafter as dozens spontaneously congregated and began learning b’chavrusa with convention guests whom they’d first met only that afternoon. Chassidim and Litvaks, residents of Lakewood, Boro Park and beyond, joined together in vigorous study until the wee hours of the morning. Throughout Shabbos, avreichim, young and old, were seen rocking their babies in one hand and shuckling over a sefer with the other, exploiting every free moment of Shabbos to learn. Even during the seudos, conversation revolved around learning, and many sat around the tables with sefarim, intent on utilizing the quiet moments between courses to ‘chap’ another line and daf in Gemara.

A concurrent program took place for the female guests of the convention, who enjoyed inspirational lectures and panels from esteemed speakers and rebbetzins. Women were moved to tears by Mrs. Weiss of Monsey who addressed the guests on Friday night after licht bentching. Her husband, a longtime participant in Dirshu’s learning and testing programs, is quadriplegic, and the only muscles he is able to move are in his eyes which he uses to learn b’chavrusa for many hours each day. “The Torah and Dirshu tests are his sole occupation and light of his life,” she poignantly shared. “My husband takes between eight to ten hours to complete every test. Once, after five hours of taking a test, there was a sudden blackout; and all the answers that he’d written with his eyes were lost. Still, he refused to admit defeat, and he started again from the beginning, intent on finishing the test.”

HaGaon HaRav Shmuel Yaakov Borenstein, shlit”a, Rosh Yeshivas Kiryas Melech, who arrived from Eretz Yisrael in honor of the Dirshu Convention, delivered a shiur b’iyun promptly after Tefillas Mussaf. The shiur focused on Hilchos Chanuka, with each guest receiving a booklet containing marei mekomos that pertained to the topics discussed.

HaGaon HaRav Moshe Mordechai Lowy, Mara D’Asra of Agudas Yisrael of Toronto, graced the convention guests with inspiring divrei Torah and chizuk during the seudas Shabbos. “Beyond what Dirshu accomplishes to increase limud Torah, it also fosters achdus among the thousands of lomdei Torah who participate in its varied learning programs. Dirshu is the one party that unites all lomdei Torah.” HaRav Lowy quoted mefarshim on the famed question regarding the stones that ceased to argue when Yaakov Avinu laid his head to rest upon them and, instead, merged into one large boulder, even though the tzaddik’s head still rested on one particular spot. “The answer is that when there is achdus, there is no more sinah or kinah, no more hatred or jealousy. There is no dispute or discord. Dirshu promotes this achdus to the Torah world.”

Various shiurim b’iyun took place during the afternoon in the tent, and following a rousing Tefillas Mincha, the Convention hosted a beautiful shalosh seudos that lasted for several hours. HaGaon HaRav Shmuel Yaakov Borenstein, shlit”a, again addressed the audience, this time raising the painful issue of the malicious war being waged against Torah in Eretz Yisrael. “I feel that I came from Eretz Yisrael with the mission of carrying our tears and strangled cries to America. Our brothers are fighting a heroic battle. You cannot abandon them!” he wept, pleading with American Jewry to share in the burden of Toras Eretz Yisrael. “Every person should endeavor according to his ability-avreichim in learning Torah, and those with financial resources in bearing the Aron, with the knowledge that it is the Aron that raises those who carry it.”

Dirshu Nasi Rabbi Dovid Hofstedter then rose to the podium. “It says that when the malach injured Yaakov, he wounded him in his thigh. The thigh is the limb that supports man’s entire body, and Chazal elucidate that the malach’s intent was to injure those who support Torah. He could not harm the Torah itself, but rather those who support Torah. The deeper meaning is that the malach created a severance in appreciating the magnitude of supporting Torah. With the passing of 2000 years in exile, this severance has widened and deepened, along with the many tzaros that we face in this era. However, we can repent by fortifying the Torah world and appreciating the significance of upholding it. Our hope right now is that by the time we conclude Chelek Hey of Mishnah Brurah in Daf Yomi  B’Halacha, many more Yidden will have joined us to commence the study of Chelek Vav.”

Shabbos ended on an exhilarated note, alight with sentiments of achdus and inspiration. As the final ‘Amen’ resounded after Havdalah, hundreds spontaneously broke out in joyous singing and dancing as everyone fervently shared in genuine simchas haTorah.

Motzaei Shabbos at the Convention was marked by a gala Melave Malka and special appearance by HaGaon HaRav Dovid Yitzchak Shapiro, Rosh Yeshivas Beer Yaakov, who at the end of his speech, extended his heartfelt blessings and praise to Dirshu administrators and all participants in the learning programs. The final highlight of the evening was the Siyum Maseches Shekalim of Daf Yomi, which was led by HaGaon HaRav Moshe Pruzansky, shlit”a, Rosh Yeshivas Chemdas HaTorah. Elated shouts of ‘mazal tov’ were followed by spirited dancing and singing together with the Roshei Yeshiva.  Dirshu administrators then expressed their appreciation to Rabbi Aharon Gabioff, Director of Dirshu USA, for orchestrating the spectacular Shabbos. The Dirshu Olam HaTorah Convention drew to a close as guests unanimously expressed the chizuk and inspiration they had gained throughout the course of an elevated Shabbos and their revived aspiration to continue climbing the rungs of learning and ruchniyus, to toil determinedly and attain the pinnacle of Beis Hashem.