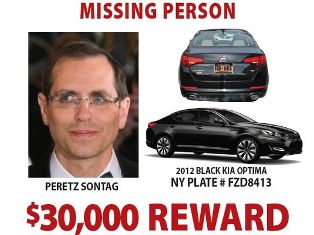 It is one week since Peretz Sontag went missing. The 50-year-old father of seven is well known in the frum community for his chesed and service in charitable causes.

Peretz was last seen driving from his home in a 2012, black Kia Optima with New York state license plate FZD-8413.

Since that time, they’ve been unable to make any contact with the phone.

Anyone with information on Sontag’s whereabouts is asked to contact Ramapo police at 845.357.2400.