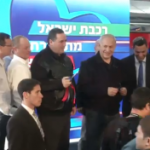 A new train station in the southern Israeli city of Sderot was inaugurated on Tuesday in a festive ceremony attended by top government officials, Israel Hayom reported. By linking up to Israel’s national railway system, Sderot residents will be able to reach Tel Aviv in just under an hour.

The Sderot station-which cost 56 million shekels (around $16 million)-is the first in Israel built to withstand a rocket strike. Sderot, located adjacent to the Gaza Strip, has been subjected to thousands of rocket attacks from the Gaza Strip over the past decade.

The opening of the Sderot Station marks the completion of the first stage of the Ashkelon-Beersheba rail project. As part of this project, other train stations are currently under construction in Netivot and Ofakim. Prime Minister Benjamin Netanyahu and Transportation Minister Yisrael Katz attended Tuesday’s ceremony.

“We are marking a milestone in the realization of the vision of connecting all of the State of Israel, from Kiryat Shmona to Eilat, eliminating the periphery,” Netanyahu said.