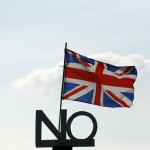 Scottish voters turned out in record numbers Thursday to decide whether to sever their 307-year-old union with England, and in the end decided in a close vote to stay in the United Kingdom. Turnout for the referendum was as high as 91 percent in some constituencies as the no vote prevailed 55 percent to 45 percent.

Early results consistently gave the no vote a lead of between a few thousand and as many as 15,000 votes, although a few important cities, such as Dundee, voted yes. early. At one point the nationwide margin was a razor-thin 50.9 no, 49.1 yes.

By the time the counting reached the halfway point, 16 of 32 constituencies, the margin stood at 56-44 in favor of staying. Results from the biggest cities, Edinburgh and Glasgow, did not come in until about 5 a.m. local time. As far as Scotland’s biggest cities, 53 percent of Glasgwegians voted to quit the union, while 61 percent of Edinburgh residents voted no. Read more at the BBC.