A legal workshop designed to help administrators of gemachs, special shul funds and other charitable entities in the Orthodox community operate smoothly in compliance with pertinent state and federal laws took place at the Spinka Hall in Brooklyn on Wednesday night, September 23. The event, which featured prominent attorneys and accountants, was sponsored by Agudath Israel of America and drew nearly 200 participants. Serving as moderator was Agudath Israel’s executive vice president, Rabbi Chaim Dovid Zwiebel, who lauded the astounding amount of chesed that is practiced in the frum community. After thanking those in attendance for taking hours from their busy schedules during a most busy time of year, he introduced a special presenter, Dayan Zalman Leib Meisels, the son-in-law of the Spinka Rebbe, shlit”a. 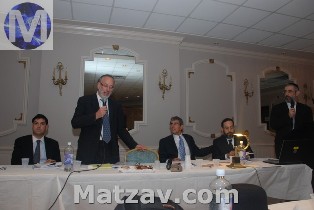 Rabbi Meisels echoed Rabbi Zwiebel’s words of praise for the sheer number of charitable funds that help so many in the community, and delivered an eloquent and passionate plea that all administrators of such funds recognize their responsibility to operate entirely by the letter of the law and in compliance with all licensing and procedural requirements. Speaking in Yiddish, he urged his listeners to resist the temptation to cut corners with regard to technical requirements of secular law and to “not take such things lightly.”

Utilizing a detailed theoretical scenario prepared by Mr. Silk and projected on screens at the front of the hall, Rabbi Zwiebel noted potential problems in the operation of a fictional entity and asked the panelists to comment in detail about the propriety and wisdom of each of the actions taken by the cast of fictional characters in the scenario.

Although the program lasted a full three hours (with a short break for Mincha), participants were clearly all ears, and dozens of questions were written on cards distributed at the start of the program and passed to the dais for a question and answer period that followed the main presentation.

“I didn’t know what to expect here tonight,” said one participant. “I don’t engage in any activity that is in any way misleading or fraudulent, and I wondered if any advice provided here would be useful to me. But all of it was. I learned how it is not enough to be honest and straight but to follow all the procedural and licensing requirements.

“Following the advice I heard tonight might well save many here from legal problems in the future.”

Wednesday night’s workshop was an outgrowth of a massive gathering shortly before Tisha b’Av on the topic of “V’osisa hayashar vi’hatov.”

After that gathering, and in response to recent developments, Agudath Israel received numerous requests from institutions and individuals asking for guidance on important legal issues affecting yeshivos, gemachs, businesses and individuals. The Wednesday night workshop was the first in a planned series to promote greater knowledge of, and compliance with, dina d’malchusa; the next is being planned for yeshivos after the yomim tovim, and will focus on various tax-related issues.

Rabbi Zwiebel noted the significance of the fact that Wednesday night’s was the first such workshop of its kind. “Heightened scrutiny of our community,” he said, “has made it imperative that accurate information and advice be effectively communicated. The larger enemy here is not venality; it is ignorance – of the law and of technical procedures. And so the goal is knowledge.”

The Agudath Israel leader emphasized the important role of the Spinka Rebbe, not only in making the Spinka Hall available for the gathering, but for his ongoing involvement in helping design and promote the workshop. In addition, he said, a group of gemach administrators played a major role in the organization and execution of the gathering.

Rabbi Zwiebel also expressed gratitude to Agudath Israel associate general counsel Rabbi Mordechai Biser for his work in putting Wednesday’s workshop together, and gave special thanks to Yehuda Kupfer, a young lawyer who is currently assisting Agudath Israel in its community services work “without whose hard work,” he said, “the gathering would not have happened.”