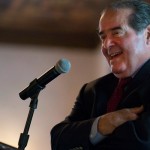 During Wednesday oral arguments in a Supreme Court case on affirmative action, Justice Antonin Scalia argued that black Americans do not benefit from race-based quota policies.

“They’re being pushed into schools that are too advanced for them,” he reportedly said of black students. “Most of the black scientists in this country do not come from the most advanced schools,” the justice added.

He said they benefited from a “slower track.”

Scalia has long opposed affirmative-action policies in higher education and is almost certain to vote against it in this case. Read more at the New York Daily News.