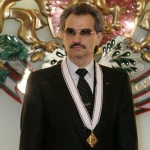 Saudi Prince al Waleed bin Talal, one of the richest businessmen in the world, has denied making statements in support of Israel, while slamming the news publication AWDNews for repeatedly targeting him.

A statement given to CCN Arabic by the prince’s private office said the article by AWDNews was “completely bogus and untrue,” adding that Prince Alwaleed had not spoken to the Kuwaiti media outlet mentioned in the article or made any of the statements attributed to him.

Prince Alwaleed’s office pointed out that the site in question had “repeatedly spread false and fabricated material about Prince Alwaleed without confirming the authenticity with his office.”

Earlier, AWD News reported that the Saudi prince had said that he would side with Israel in case of a Palestinian uprising and that he would attempt to break any Arab initiatives set to condemn the Jewish nation.

“I will side with the Jewish nation and its democratic aspirations in case of outbreak of a Palestinian Intifada (uprising),” bin Talal was quoted as saying by Kuwaiti Al Qabas daily.

“I shall exert all my influence to break any ominous Arab initiatives set to condemn Tel Aviv, because I deem the Arab-Israeli entente and future friendship necessary to impede the Iranian dangerous encroachment,” he added.

According to the AWDNews, the prince and entrepreneur urged the Saudi Kingdom to devise a new strategy to combat Iran’s increasing influence in Gulf States by forging a defense pact with Tel Aviv to deter any possible Iranian moves in the light of unfolding developments in Syria and Moscow’s military intervention. The Saudi prince is on a regional tour, visiting the other Gulf Arab littoral states–Kuwait, Bahrain, Qatar, the United Arab Emirates and Oman–to muster support for Saudi-backed rebels in Syria, reported the daily.

“The whole Middle East dispute is tantamount to matter of life and death for the Kingdom of Saudi Arabia from my vantage point, and I know that Iranians seek to unseat the Saudi regime by playing the Palestinian card, hence to foil their plots Saudi Arabia and Israel must bolster their relations and form a united front to stymie Tehran’s ambitious agenda,” Kuwaiti News Agency (KUNA) reported him as saying on Tuesday.