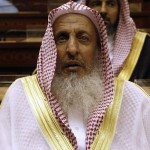 Sheikh Abdulaziz Al-Asheikh, the Grand Mufti of Saudi Arabia, claimed the Islamic State is actually a part of the Israeli army, referring to a recent threat made against Israel by the Islamic State.

“This threat against Israel is simply a lie. Actually, Daesh (IS) is part of the Israeli soldiers,” the Grand Mufti told the Saudi Gazette.

Last weekend, the Islamic State released a taped message from its leader, Abu Bakr al-Baghdadi, where he threatened to turn Israel into a “graveyard.”

Asheikh also said the Islamic State have tarnished the image of Islam and Muslims.

“They cannot be considered as followers of Islam. Rather, they are an extension of Kharijites, who rose in revolt against the Islamic caliphate for the first time by labeling Muslims as infidels and permitting their bloodletting.”