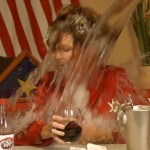 Sarah Palin became the latest politician to accept the ALS ice bucket challenge, posting a video to her Facebook page yesterday and challenging both Hillary Clinton and Sen. John McCain.

“Of course I accept. You know what though? I’m too old for this. Really. And don’t you guys think – c’mon – at this stage of my life, in my career, aren’t I a little too prim and proper for all that ice bucket water dump thing?” the former vice presidential candidate said, adding that her daughter Piper participated and “took care” of the cold water part.

Instead Palin said she was going to write a check, doubling the original amount.

“Then I’m going to show you what my ice bucket is tonight,” Palin said before adding ice to a glass and drinking Diet Dr. Pepper.

“Now, I get to challenge someone, right? I challenge Hillary Clinton, and he whom she has recently said is her favorite Republican. He is my friend, I also challenge Sen. John McCain. Cheers,” Palin said, lifting her glass and ultimately getting drenched with a bucket of ice water.

Palin was challenged by the owners of Wasilla Arctic Cat, a snow mobile dealer, to pour a bucket of iced water over her head as part of a charity campaign that has swept social media, raising awareness of Lou Gehrig’s disease.