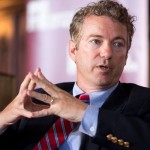 Rand Paul insists he’s not an “isolationist.” Writing this week in TIME, he says, “I look at the world, and consider war, realistically and constitutionally.”

But in reality, the Kentucky senator has advanced a brand of neo-isolationism and appeasement that is as short-sighted as it mistaken. Despite his recent, and frantic efforts to recast himself as not completely ridiculous on national security issues, the truth is his record often puts him in league with Barack Obama-or even to the president’s left. Anyone who truly cares about American liberty at home must not ignore real enemies and rising threats abroad. Rather, we must confront such challenges wisely and decisively to protect American lives, our economy and our allies.

He may be changing his tune now, but he can’t hide from his record. Senator Paul has long been wrong and far out of the mainstream on three key matters – Iran, the Islamic State and Israel. Let’s look at each in turn.

Iran: Senator Paul now says “all options are on the table” when it comes to preventing Iran from developing nuclear weapons. But few believe he is serious.

In a radio interview in 2007, while helping his father, isolationist Rep. Ron Paul, run for president, Rand actually denied that Iran is a threat to the United States or Israel. He did so despite the fact that the U.S. government designated Iran a “state sponsor of terrorism” as far back as 1984. “Even our own intelligence community consensus opinion now is that they [Iran] are not a threat,” Rand said. “Like my dad says, [the Iranians] don’t have an Air Force, they don’t have a Navy. You know, it’s ridiculous to think they’re a threat to our national security…. It’s not even that viable to say they’re a national threat to Israel.”

In September 2012, the U.S. Senate voted 90 to 1 in support of Joint Resolution 41 to advance a firm American policy “to prevent the Government of the Islamic Republic of Iran from acquiring a nuclear weapons capability,” a policy that “urges continued and increasing economic and diplomatic pressure on …I ran,” and one that “warns that time is limited to prevent … Iran from acquiring a nuclear weapons capability.” The authors specifically noted: “nothing in this resolution shall be construed as an authorization for the use of force or a declaration of war.” The focus was exclusively on urging the Obama administration to increase diplomatic and economic pressure on Iran. The resolution was even non-binding.

Nevertheless, this was all too much for Senator Paul, who chose to be the only member of the U.S. Senate to vote against it.

In February 2013, Sen. Paul delivered a disturbing speech at the Heritage Foundation in which he urged leaders in Washington to seriously consider a policy of “containing” a nuclear-armed Iran, rather than focusing like a laser on preventing the Islamic Republic from building or acquiring nuclear warheads.

“Containment,” Paul said, “should be discussed as an option.” This, however, put him to the left of President Obama, who has said, “Iran’s leaders should understand that I do not have a policy of containment. I have a policy to prevent Iran from obtaining a nuclear weapon.”

In January 2014, Senator Paul sided with President Obama in opposing the passage of new economic sanctions on Iran, further evidence he would rather appease the mullahs in Tehran than ratchet up pressure on them to give up their illegal and dangerous nuclear program. “I think while they [the Iranians] are negotiating – and if we can see they’re negotiating in good faith – I don’t think it’s a good idea to pass sanctions,” Paul told CNN.

The Islamic State: Earlier this summer, Paul questioned in the Wall Street Journal whether there was any good reason for the U.S. military to stop or even slow down the Islamic State’s jihadist offensive in Iraq. He did so despite the fact that ISIL, as it is commonly known, has been slaughtering Muslims and Christians across the region. Yet he saw no serious threat to the American people from ISIL and could not bring himself to support the use of U.S. airpower to help our Arab and Kurdish allies defeat ISIL and prevent the establishment of a radical Islamic caliphate. What’s more, he continued to argue that it is in part the GOP’s fault that Iraq is fast becoming the epicenter of terrorism.

Rick Santorum, a former U.S. senator from Pennsylvania from 1995-2007, is chairman of Patriot Voices and author of Blue Collar Conservatives.