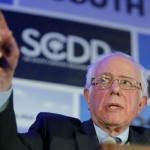 Just hours before the Democratic presidential debate last night, Bernie Sanders revealed details about a plan for a single-payer healthcare system on Sunday.

According to the Vermont senator’s “Medicare for All” plan, individuals would pay a 2.2 percent “premium” and employers would dole out a 6.2 percent payroll tax to fund the healthcare plan.

Rival candidate Hillary Clinton criticized Sanders last week over his universal healthcare plan, arguing that he didn’t have a plan to pay for it. Read more.