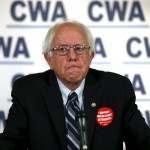 Citing several officials, the Post reports the DNC suspended Sanders’ campaign from using the party’s crucial voter information until it provides an explanation and guarantees the Clinton data has been destroyed.

Sanders campaign manager Jeff Weaver acknowledged that a low-level staffer had viewed the information but claimed it was accessed because of a glitch by a software vendor hired by the DNC. Weaver said a staffer was fired over the incident.

The DNC controls a master list of voter data that is rented out to campaigns, which then add information amassed by their own staff. Read more at The Washington Post.