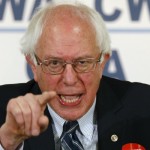 In a Sunday morning interview with CBS’s Face the Nation, the self-described “democratic socialist” said many of Trump’s fans are “working-class people” with “legitimate” grievances about economic changes, which the real estate mogul has channeled into xenophobic rhetoric.

Sanders, however, believes he can appeal to those same people without “dividing us up and having us hate Mexicans or Muslims.”