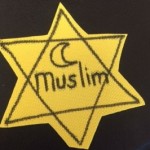 In an controversial effort to protest Islamophobia, an Iranian-American professor from the University of San Diego led her students on campus wearing the yellow star badges with “Muslim” written on it, similar to the Holocaust-era stars Jews were forced to wear by the Nazis.

Bahar Davary, professor of theology and religious studies, told the Washington Free Beacon that the protest last Thursday was a “class/campus project to raise awareness against Islamophobia. It is not intended to make an analogy between the current situation of Muslims in the US to that of Jews in Germany and wider Europe before the Shoah.”

“We realize that it is a stark symbol that carries a lot of weight and meaning today not only for Jews but for humanity,” Davary added. “That is as it should be, if we are to learn anything from our collective history. The yellow Star of David with the word Muslim written on it is a symbol that my students and I wear with utmost respect for the memory of the Jewish lives lost.”

The idea originated during Dahary’s class “Islamic Faith and Practice,” an introduction to Islam, the Times of San Diego reported. She estimated that over 100 stars were being worn by students and faculty members on campus.

Dahary also advised her students to not wear the stars off campus “in case the meaning is misunderstood.”

StandWithUs, a pro-Israel advocacy and education organization, criticized the move by Davary.

“While protests against anti-Muslim bigotry are understandable and legitimate, using the Holocaust in this inappropriate and shocking way serves to trivialize and deny meaning to the unspeakable horrors that Jews suffered at the hands of Nazi Germany,” said StandWithUs San Diego area director Sara Schoonmaker, The Blaze reported.