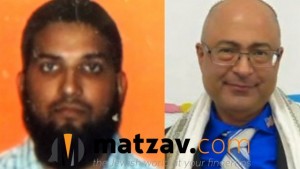 According to the pastor of one of the victims of the San Bernardino terror attack, just weeks prior to the deadly shooting, Sayed Farook told Nicholas Thalasinos—a Messianic Jew and fellow health inspector—“You will never see Israel.”

Pastor Bruce Dowell of the Shiloh Messianic Congregation in California told Sean Hannity on Friday’s radio show, “[Thalasino’s] wife told my wife… [Farook] said to Nick ‘you will never see Israel.’ That’s according to his wife, Jennifer and that comes straight from my wife. She was with her for the last two days.” The pastor said Farook told that to his congregant “face-to-face” approximately two weeks before the attack.

According to Dowell, Farook was the county food inspector for the region, and a colleague had recently done a walk-through with him at a Christian camp. The pastor said he did not know Farook but that his son did, telling Sean “my son said he wasn’t an overly friendly individual.”

Dowell said Thalasinos was a deacon with their congregation who served faithfully. He was also a conservative and fan of Sean Hannity’s. “He absolutely did love you. He is very conservative in his views…He was always talking about your show,” said the pastor.