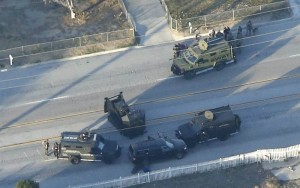 Law-enforcement officials told The New York Times the FBI has evidence that Syed Farook, one of the two shooters in the San Bernardino attack on Wednesday, had been in contact with extremists both domestically and abroad, including one person in the United States who had been investigated for suspected terrorism.

CNN reports officials say Farook “communicated by phone and via social media with more than one person being investigated for terrorism.”

Another official said Farook has “overseas communications and associations.”

Farook traveled to Saudi Arabia last year and returned with a Pakistani wife, Tashfeen Malik, who was the second killer. Read more at The New York Times.