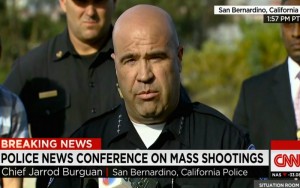 The San Bernardino Police Department held a press conference Wednesday afternoon about the mass shooting at the Inland Regional Center for disabled individuals.

“Up to three people had entered the building and opened fire on people inside the building,” Chief Jarrod Burguan said, before listing preliminary numbers indicating “upwards of 14 people that are dead, and upwards of 14 people that are injured.” Additionally, he said, “We do not have any identification on who those suspects are, and we do not know what the motive is for the shooting at this point.”

Asked whether the situation constitutes a terror attack, the chief responded, “Obviously, at minimum, we have a domestic terrorist-type situation that occurred here.” Pressed further, Burguan said, “The only thing I’m comfortable saying at this point is that the information we have is that they came prepared to do what they did as if they were on a mission.” Read more.