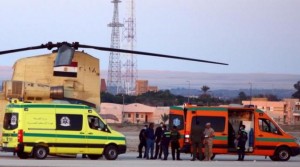 A Russian airliner with 224 people aboard crashed in Egypt’s Sinai Peninsula today, according to the Egyptian civil aviation authority. There were no survivors.

The plane, an Airbus A321 operated by the airline Kogalmavia, was flying from the Sinai Red Sea to St. Petersburg in Russia. It crashed in a mountainous area soon after dawn.

“I now see a tragic scene. A lot of dead on the ground and many who died whilst strapped to their seats,” a security officer at the scene told Reuters. “The plane split in two, a small part on the tail end that burned and a larger part that crashed into a rock.”

ISIS claimed responsibility for the crash, but the plane does not appear to have been shot down. Russian Transport Minister Maxim Sokolov also dismissed ISIS’s claim, saying it “must not be considered reliable.” Read more.