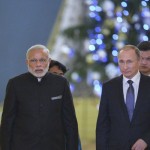 Russian President Vladimir Putin and Indian Prime Minister Narendra Modi on Thursday signed a number of deals on policies including defense and energy, solidifying a partnership between the two countries.

Putin announced that Russia planned to buld a series of nuclear plants in India over the next two decades.

An estimated $7 billion worth of deals were signed during Modi’s trip to Russia, many of which were defense-related.

“I see in Russia a prominent partner in India’s economic transformation,” Modie said after he and Putin agreed to reduce visa requirements between the two countries.

The two also agreed on building a Russian nuclear energy plant in the southern Indian state of Andhra Pradesh. Read more at BBC.