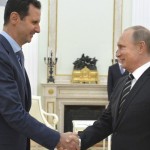 A Russian foreign ministry spokeswoman softened the country’s stance on Syria on Tuesday, saying that “the fate of the president of the country should be decided by the Syrian people.”

Maria Zakharova told the Ekho Moskvy radio station that Russia is “not saying that Assad should leave or stay,” and added that the country “never said” that keeping Assad in power was a necessity.

The statement appears to be a step back from Russian statements that its military intervention in Syria was to preserve Presdient Bashar al-Assad’s hold on power. Read more at BBC News.