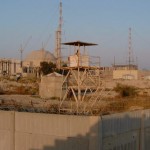 Behrouz Kamalvandi, spokesman for the Atomic Energy Organization of Iran seems to be referring to extending the Russian-built Bushehr nuclear power plant in southern Iran.

This move come a year after Iran signed a contract with Moscow to build up to eight reactors at the Bushehr power plant, where one nuclear reactor is already running.

The International Atomic Energy Agency (IAEA), the United Nations nuclear watchdog, ended this month a 12-year investigation into Iran’s nuclear weapons program and sanctions on Iran are expected to be lifted as a result.