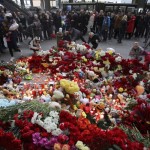 A Russian official said on Sunday that the flight which crashed yesterday broke up in mid-air, as first reported in the Daily Beast, but that it is too early to conclude what happened to it.

Russia’s air safety regulator ordered Metrojet, the airline whose plane crashed killing everyone on board on Shabbos, to ground its fleet of Airbus A321s on Sunday.

The air safety agency says the company has to thoroughly analyze the situation and all risks involved before deciding on Monday whether the airline will start flying again.

Over 100 emergency workers have been sent the Sinai Peninsula to search for bodies and examine debris. German airliner Lufthansa, Air France and Emirates have all announced that they will not fly over the area until the cause of the crash has been identified. Read more.