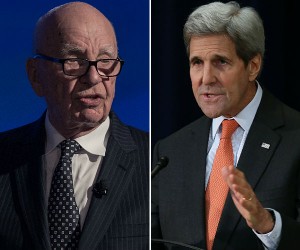 Secretary of State John Kerry sank to “one of the low points of recent Western diplomacy” by suggesting Islamic State (ISIS) gunmen had a “rationale” for a bloody siege at French magazine Charlie Hebdo, media titan Rupert Murdoch says.

In a speech to the Hudson Institute, which honored Murdoch Monday night with its Global Leadership Award, he tore into the Obama administration foreign policy in particular — and the left in general, the New York Post reports.

“For a U.S. secretary of state to suggest that Islamic terrorists had a ‘rationale’ in slaughtering journalists is one of the low points of recent Western diplomacy and it is indicative of a serious malaise,” the executive chairman of News Corp. and 21st Century Fox and chairman of the Post said.

Kerry drew fire last month after trying to draw a distinction between the rampage at the satirical magazine and the Nov. 13 ISIS attacks in Paris, saying of the Charlie Hebdo siege: “There was a sort of particularized focus and perhaps even a legitimacy in terms of — not a legitimacy, but a rationale that you could attach yourself to somehow and say, OK, they’re really angry because of this and that.”

“For America to be embarrassed by its exceptionalism is itself exceptional and absolutely unacceptable,” he said of Kerry’s remark last year that he gets “uptight” hearing politicians call the nation “exceptional.”

The businessman also lobbed a veiled barb at President Barack Obama’s leadership, suggesting he misreads the country and “the extraordinary potential of its people.”

“For America to have a sense of direction, two conditions are essential: A U.S. leader must understand, be proud of and assert the American personality,” he said, the Post reports. “An identity crisis is not a starting point for any journey.”

According to Politico, Murdoch decried America’s loss of direction, and blamed the current culture of self-obsession on the left.

“The left seemed to be happy for the incarceration of millions, whether in Vietnam under Ho or in China under Mao,” he said, Politico reports. “Why agonize over inhumanity when you could blithely celebrate yourself?”