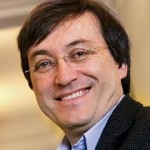 Hebrew University professor Moshe Halbertal was invited to deliver the University of Minnesota’s annual Dewey Lecture in the Philosophy of Law. Unfortunately, the Palestinian and pro-Palestinian activists on campus don’t have very much respect for the philosophy of law, at least not the laws that protect freedom of speech. Two dozen hecklers tried to drown out Halbertal by shouting “denunciations of Israel” (as the local press described it) and accusing Halbertal of being “a war crimes apologist.”

Ironically, in his remarks (after the hecklers were removed), Prof. Halbertal suggested that Israeli soldiers were not doing enough to protect enemy civilians during warfare. Since that was his position, Halbertal must have been puzzled that the Palestinian advocates would attack him so fiercely.

Welcome to the real world, Moshe Halbertal. Criticizing Israeli polices is not enough. When the hecklers called him a “war crimes apologist,” they weren’t referring to one or two particular alleged war crimes. They consider the very existence of the State of Israel to be a war crime. Thus if someone supports Israel’s right to exist –even the shrunken, weakened Israel that Halbertal wants– then they are “war crimes apologists.”

Quite a turn of events for someone who has made a name for himself as an Israeli critic of Israel. Of course, he had a good deal help along the way, especially from New York Times columnist Thomas Friedman. Of the twenty-five times that Halbertal has been quoted in the Times, nine of them have been in Friedman’s column on the op-ed page.

We all know how that works. Friedman picks a theme for one of his anti-Israel columns, then calls up the same five or six “respected Israeli academicians” to see which of them will provide a quotation that matches his predetermined theme.

Halbertal was discovered by the Times to be a ‘useful Israeli’ even before he had entered the academic world. In February 1983, when he was just “a 24-year-old religious student,” the Times was excitedly reporting how Halbertal was part of a supposed new generation of religious Israelis who disdained the idea of “holding territory” and was forming a group to advocate “relinquishing part of the West Bank.”

Soon enough, Halbertal managed to secure an academic title, so the Times could pretend he was a “respected academician” instead of having to acknowledge that he was basically a partisan ‘community organizer.’

A sampling of Halbertal’s pearls of unwisdom in the pages of the Times over the years:

— The Jewish residents of Judea-Samaria are comparable to the Zealots in Roman times who, “mobilized by a megalomanic sense of their role in history, pushed the Jewish people at the time into a struggle they did not want [until] it destroyed them.” (Sept. 18, 1997)

— Those who oppose Israeli territorial surrender “are dooming Israel to an apartheid state.” (July 28, 2000)

— Halbertal “disapproved” of an Israeli strike on a terrorist leader in Gaza, because some of the terrorist’s relatives were nearby and were harmed. (Jan. 13, 2009)

— Halbertal participated in weekly vigils in a mostly-Arab neighborhood in Jerusalem to demand that Jews not be allowed to move into the area. The Ku Klux Klan would have been proud. (March 10, 2010)

That last dire warning about Israel being on the verge of “apartheid” was uttered by Halbertal five years ago. Funny, five years have passed and still no apartheid. That’s because the “apartheid” warnings are really just a cheap scare tactic to pressure Israel into making more concessions.

But no amount of concessions will be enough to satisfy the Palestinians, so long as Israel still exists. To them, any size Israel, and all Israelis, are the enemy. As Moshe Halbertal discovered in Minnesota this month.