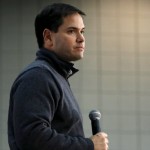 The Washington Post reports that Marco Rubio used his influence as majority whip of the Florida House of Representatives to get a real estate license for his brother-in-law, a convicted cocaine trafficker.

In July 2002, Rubio wrote a letter on his official stationery to the Florida Division of Real Estate recommending Orlando Cicilia “for licensure without reservation.”

The letter said that Rubio had known Cicilia for over 25 years, but did not mention that Cicilia was married to his sister or living in the same home as Rubio’s parents. Cicilia was convicted in 1989 for distributing $15 million worth of cocaine. Rubio declined to provide comment to the Post. Read more at The Washington Post.