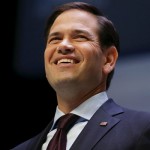 In the first poll conducted since the debate, a Monmouth University survey found the senator supported by 13 percent of likely GOP voters, just behind Ben Carson (16 percent) and Donald Trump (26 percent). Rubio’s numbers have tripled since a Monmouth poll conducted in September. What’s more, Rubio’s favorable ratings are on par with Carson’s. Read more at Monmouth University.