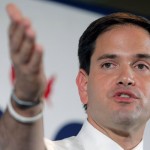 Marco Rubio went after Hillary Clinton on ABC’s “This Week” on Sunday for not saying that the United States is at war with “radical Islam” during last night’s debate.

“That would be like saying we weren’t at war with Nazis, because we were afraid to offend some Germans who may have been members of the Nazi Party but weren’t violent themselves,” Rubio said. Read more at The New York Times.