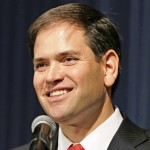 “I have been warning throughout this campaign that North Korea is run by a lunatic who has been expanding his nuclear arsenal while President Obama has stood idly by,” the Republican presidential candidate said in a statement. “If this test is confirmed, it will be just the latest example of the failed Obama-Clinton foreign policy.”

The Florida senator added that “enemies around the world are taking advantage of Obama’s weakness. We need new leadership that will stand up to people like Kim Jong Un and ensure our country has the capabilities necessary to keep America safe.”

The White House has said it was “aware of seismic activity,” but declined to confirm the nuclear test. Read more at Politico.