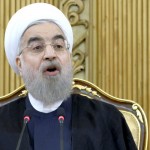 “As the United States seems to plan to include the names of new individuals and firms in its previous list of cruel sanctions in line with its hostile policies and illegitimate and illegal meddling in the Islamic Republic of Iran’s right to reinvigorate its defense power, the program for the production of the Armed Forces-needed missiles is required to continue more speedily and seriously,” President Rouhani’s written order read.

Rouhani wrote that Tehran has time and again underlined all throughout the nuclear negotiations that it would “never negotiate with anyone about its defense power, including the missile program, and would never accept any restriction in this field.”

As reported earlier on Matzav, the White House has delayed its plan to impose new financial sanctions on Iran for its ballistic missile program, according to U.S. officials. New sanctions on nearly a dozen companies and individuals in Iran, Hong Kong and the UAE for their role in developing Iran’s ballistic missile program were scheduled to be announced Wednesday morning in Washington, according to a notification the White House sent to Congress, but a decision was made later on Wednesday to delay the sanctions.